Organizing a hackathon was always my target. In 2016, I wanted to make this target real. However, the amount of work I had on my head was a little bit overwhelming so I needed to postpone it. This year, I set it as my top priority.

Finally, on 23rd – 24th March 2017 it happened. I organized my first 24 hour hackathon in the company I work in. In this post, I am going to share with you my thoughts on this event and share things I learned during its preparation.

In my opinion, hackathons bring the best value to software developers. You, as a developer, are challenged to accomplish your own idea in the strict amount of time. Additionally, there is a need to prepare a plan for yourself and/or your hackathon’s team so that in the end, you win the hackathon. For me, those activities awaken one of the most important value in our life – the passion.

This is the reason I always wanted to organize a hackathon. By taking part in the events like that, developers show up their skills, focus on the project’s target and receive much pleasure in the hackathon’s final. Even though I was heavily engaged in a preparation of the 24H hackathon I formed a team with my work mates and we coded together through the whole night. Best thing ever.

I highly encourage every software engineer to form a team and register for the nearest hackathon in your area. You will not regret it.

As I wrote in the beginning, it was my first ever hackathon as an organizer. Because of that, I decided to organize it in my work place. I knew the people that would come, environment and building details (rooms, network). Before I started spreading the idea of hackathon, I first searched for the best advices how to run a hackathon. I think that the most helpful resource is hackathon.guide. If you ever think about organizing a hackathon, check this page. It allowed me to create a full list of things that need to be prepared in order to organize a good hackathon.

The next step was to find the right people that will help me. I did prepare a plan, a schedule and kept an eye on everything, however I know I am not an expert in everything. I formed informal team that took care of some hackathon’s parts like graphical design (posters, stickers, diplomas), buying awards etc.

If you organize a hackathon you need to have a place to run it in and funding for its preparation. Thanks to the company I work in and their great attitude to such initiatives, we were able to have two big and comfortable rooms for the participants, full food service (including lunch, suppers, breakfast, pizza, snacks, drinks) and awards sponsorship. Those things increased the feelings of well-organized hackathon.

As always, hackathons without participants are useless. I paid a lot of attention to good advertising of the event and showing that I am making it at the professional level. It would not happen without good graphical design preparation including posters, diplomas and stickers. The graphical part was prepared by Agnieszka Kubacka.

A diploma that we gave to the winners can be seen below. 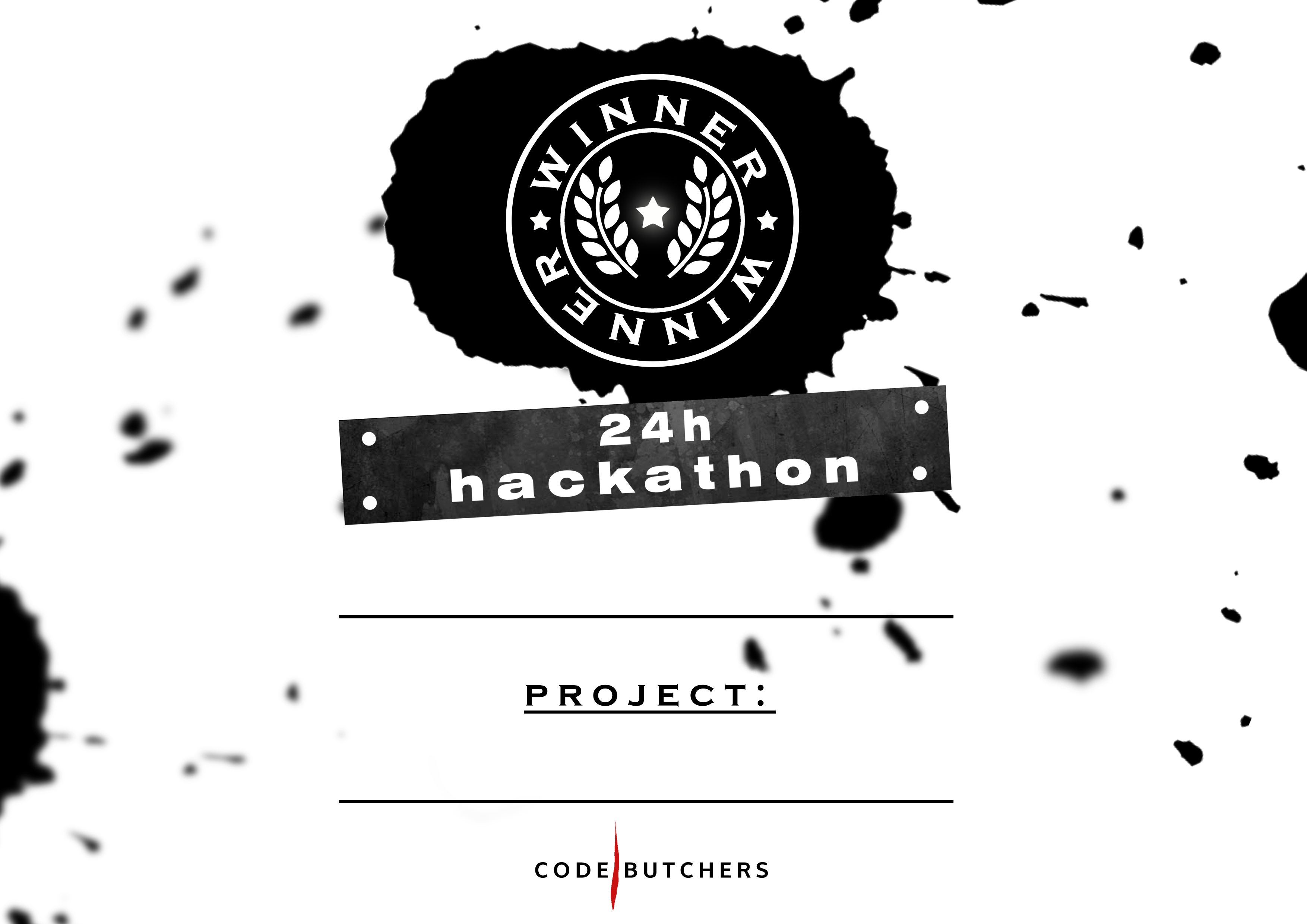 There are a lot of hackathons that are particular topic driven. For my first hackathon, I wanted to give as much freedom as possible to participants. Thanks to that, projects were created in very different areas. We had projects which used:

This freedom in projects’ areas gave a lot of fun to the participants. With all things prepared, there was 6 teams registered including 21 people! We spent 24 hours starting from Thursday 23rd 9.30 AM to Friday 24th 9.30AM, coding our projects, competing with other teams. Let me tell you the truth. Seeing people sacrifying the night for a hobby project is the best thing I’ve seen in recent years. Not to mention, that the smell of passion was in the air. Projects’ results were presented on Monday when everyone got back to the shape. Oh and by the way, yes – we did take pictures. Unfortunately, not everyone allowed me to share them.

During the event, I was talking to participants about their thoughts on the hackathon. The majority of opinions were that it was well organized with very cool-engineering atmosphere. However, when you are an organizer of the event, people will not share every details with you in person (they just do not want to hurt your feelings…).

That’s why right after the hackathon, I sent to hackathon’s participants an anonymous survey in which they could share pros and cons of hackathon. I must admit, most of the survey opinions coincided with the ones I heard during the event. Luckily, one didn’t.

It was definitely well organized. I think it was the hardest thing to motivate people to participate. Rest of hackathon is just teams effort. The good thing is ability to observe what other teams do. I’d propose to provide some person, kind of party maker, who will see big picture of event, talk with participants, spread news among the teams. It also could be a good idea to share knowledge and experience between participant when someone need it in his task. The main goal in my opinion is to motivate people to take risk and count on help of environment.

Thanks to this opinion, next time I organize an event like hackathon, I will need to either become a hackathon party maker or ask someone to become one, since I love coding during hackathon. If you ever organize events, let the participants share their thoughts. It helps a lot.

As I mentioned in the Making the hackathon real section, it would be extremely difficult to organize a hackathon on my own. However, in 2016 I founded a software craftsmanship group with two people from my team, Tomasz Banaś and Sławomir Iciek. The group name is Code Butchers and during the last year, we mainly focused on organizing software meetings and workshops. The idea behind the group is simple – share the software craftsmanship approach. It is possible that you will see more events and meetings from this group in the upcoming years.

In this post, I wanted to briefly present you the experience from my first hackathon as an organizer. If you have any questions, thoughts regarding this hackathon or hackathons overall, please share in the comments section!